Sevenths are among the first intervals I bring to the attention of my students who are are interested in studying chord voicings. The use of 7ths, as they relate to jazz, may be heard by listening to the left hand of pianists like “Bud” Powell and Sonny Clark during their solos.

Heptachords are 7-note scales and perhaps the MAJOR heptachord is the most well-known of all heptachords because it actually IS the major scale upon which our music system is based.

Now I don’t know about you but saying “major scale” rolls off of my tongue a lot easier than saying “major heptachord”! I have to be careful to not bite my tongue when I say it! I use these kinds of terms in class as a way to provide a historical perspective. It’s good to know this kind of stuff but don’t get hung-up on names! They’re only words that are part of the historical record.  Don’t over-analyze because too much analysis breeds paralysis!

Major 7th intervals are made by extracting the first and last note of a major heptachord. Just select and extract the 1st and 7th scale steps only and the interval is ready to be deployed.

Start with C and follow the schematic’s instructions, step-by-step, the C major heptachord will reveal itself on your piano’s white keys. Play the heptachord in the keys of G, D, A and E too.

Construction of Generic 7ths from the 7-Letter Musical Alphabet

1. Select any letter from the 7-letter sequence
(In doing that you’ve established the interval’s letter name and root… think of it as scale step “1″.)

3. Having skipped over scale steps 2, 3, 4, 5, and 6, select the very next letter in the sequence.
(In doing that, you’ve selected scale step “7″ as the interval’s upper note and then you extract scale steps 1 and 6.)

That’s it! You’ve constructed a 7th… a generic 7th*.
*(All accidentals are excluded In generic intervals. Only letter names and staff position matters.)

7ths – These intervals may be identified by their letter names because both letter names are the 1st and 7th letters of an alphabetically sequenced 7-letter string (heptachord).

Keep the following points in mind:

1. The staff represents a piano’s white keys only. The black keys are notated by accidentals. (Staff steps, unmodified by accidentals, are whole steps, except for the half steps at E to F and B to C) (One staff step = the distance from any staff line to the very next staff space or vice versa, up or down)

2. Every staff line and every staff space correlates to a specific white key on the piano.
(This point applies to all ledger lines and ledger spaces.) 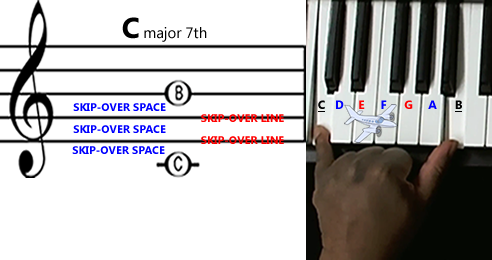 (The video below shows LH 7ths being used in a practice exercise on blues chord changes.)
In jazz and pop music chord symbol notation, 7ths, as in X7th, are played as minor 7ths or b7s. The only time a major 7th is played is when a specific instruction calls for it like (EbMaj7).

Reveal this hidden “You Play” version: (to play along with the rhythm section without me)

The most commonly used accidentals are shown in the lineup just below followed by examples of the most common occurrences of 7ths in the key of C.

This link will open an Acrobat/Adobe flash type of applet where you’ll be asked to correctly match ten intervals via a drag-n-drop process. Doing the exercise at least 4 or 5 times will give you an introductory workout on identifying and matching the intervals in C and other keys.

Study well and have fun,

Your donations will be greatly appreciated!